Over the past two weeks, I introduced you to a justifiably overlooked children’s book, Woofus, published in 1944. I acquired the book from my dad, and it was one of his childhood books. In last week’s installment, the second section showed us that what initially seemed to be accidental racism might in fact be a wee bit intentional. That is, unless naming a black cat “Tar Baby” was considered perfectly acceptable in 1944.

Then again, this was the same society that, as chronicled in the James Lilek book, Mommy Knows Worse, thought that placing babies in cage-like cribs suspended outside windows was a great way to get them fresh air.

Now, in this final installment, the chronicle of Woofus concludes (in both dramatic and anticlimactic fashion). 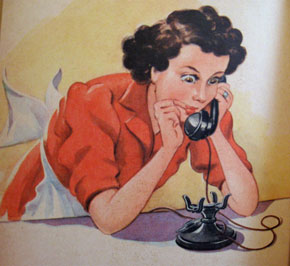 In the story so far, Woofus was born black and “woolly” to a litter full of golden-brown pups. Since no one wanted him, the family was unable to give him away, and he became their favorite object of ridicule. (It has just occurred to me that Woofus lacks a mother, implying that she was given away along with the puppies, perhaps because she had transgressed the puppy code by giving birth to a “funny-looking” dog.)

While on a pic-nic in the woods, Woofus finds a lonely black kitten, who is adopted by the family and then dubbed Tar Baby, presumably so it wouldn’t get too uppity.

As the third act begins, the author laments, “But poor Woofus! He forgot that he must be a good dog.” A neighbor, Mrs. Jones, calls to complain that “Woofus has ruined my vegetable garden.” Mother expresses disbelief, but Mrs. Jones is sure it is “Woofus and no other dog.” Because only black, woolly dogs would ruin a vegetable garden.

Mother’s chestnut-brown eyes grow extremely wide at this news, and even the bow on the back of her apron stands up in alarm. 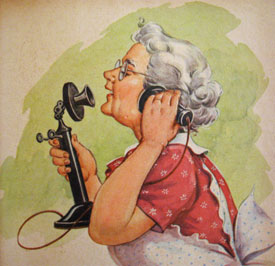 Nosy Mrs. Jones has company. The same afternoon, Mrs. Smith calls to inform Mother that Woofus has “pulled her clean clothes off the line and dragged them in the dirt.” Again, Mother expresses disbelief, but Mrs. Smith says she is certain. As evidenced from the illustration, she gets a lot of pleasure from relaying this information. No doubt, she’s just looking for an excuse to use her old-fashioned phone, which hasn’t been ringing much lately. In all likelihood, she doesn’t even have a clothes line. 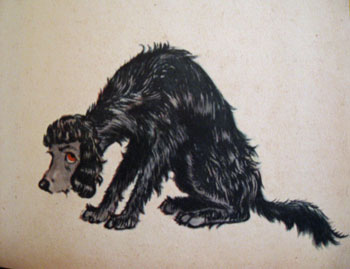 So the entire family takes turns scolding Woofus: first Bobbie, then Jean, then Mother and Daddy. This is, after all, what passes for entertainment in this family. Woofus hangs his head in shame and repeats his mantra: “I am a big dog and a woolly dog. I am a smart dog. I must be a good dog. I must be a brave dog, too.”

Clearly, he believes in the power of positive affirmations. Stuart Smalley would be proud. 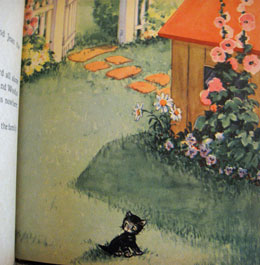 The next afternoon, the family discovers that Woofus is missing. Only Tar Baby is sitting in the kennel yard “all alone and not purring nor looking very happy.” Woofus doesn’t come home for dinner, and the family is sad. Hmm. I can’t imagine why Woofus would be staying away from them, after being yelled at by all four family members without any clear idea of what he’d done wrong. I mean, he came home after a fun day of digging and laundry snatching, and they yelled at him for just walking into the yard!

At this point in the book, I began to suspect that the writer and illustrator had worked completely independently. I believe the process worked like this: The illustrator brought in a portfolio of watercolors showing a family and their two pets. The publishing house liked the work, but especially liked the fact that the artist was willing to sell them the whole package for nearly nothing. They then commissioned a writer to look at the illustrations and turn them into a story. “I know these pictures are a little dull, so use your words to make the story exciting,” they said. “And add just a hint of racism. Children like that.”

The family is eating dinner when the telephone rings again. Mother answers it (since answering a phone is, of course, women’s work and she was already up from the table, serving everybody seconds while her own plate of soup sits untouched at her place). She comes back and reports cheerfully that “Tommy Jones fell in the creek and Woofus jumped in and pulled him out and saved him. So Mrs. Jones is not angry about her vegetable garden any more.” You would think that such an exciting scene would have made a better illustration than a view of the family eating tomato soup and mini quiches. But you are not a publisher sitting on a portfolio of generic family illustrations.

Jean is so happy to hear the news that her delight shows in her bright blue eyes. She tries hard not to think about the fact that both her mommy and daddy have brown eyes. Bobbie keeps telling her she’s adopted, but Bobbie is wrong. She resolves to take out her frustration on Woofus when he comes home later. 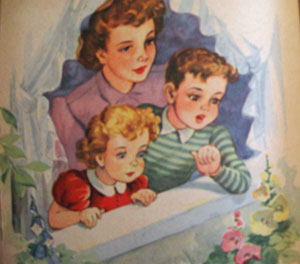 Just as the family returns to eating their dinner, the phone rings again. This time it is Mrs. Smith. Mother reports, “She says Woofus is a very brave dog to rescue Tommy Jones from the creek. She is not angry about her wash being pulled off the line now.”

Bobbie and Jean say in unison, “I wish Woofus would come home.” Mother, Jean and Bobbie look out the window eagerly. You can tell from their expressions that something very exciting is happening out there. Don’t you wish you could see it, too? 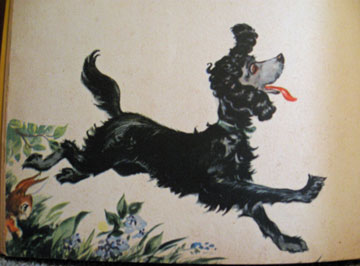 Quite proud of himself, Woofus bounds happily home, watched by a slightly anthropomorphic rabbit with large eyes.

Woofus is given a big bone for his bravery. In deference, Tar Baby doesn’t “try to even get a smell of it” but just sits, watching Woofus and purring. Of course, kittens don’t normally gnaw on giant bones, but don’t let that intrude with your enjoyment of the story.

Bobbie and Jean come down to the kennel and finally give Woofus the acceptance he’s been seeking, telling him “what a good, brave dog” he is and how proud they are to have him.

In his funny dog-talk, he responds, “Woof-woof — woof. Woof-woof.” 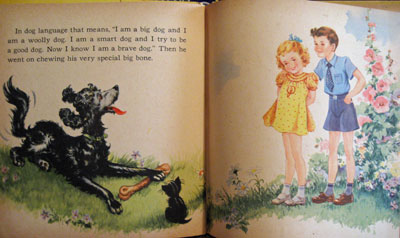 On the final page, the author translates his message. In dog language, we’re told, that means, “I am a big dog and I am a woolly dog. I am a smart dog and I try to be a good dog. Now I know I am a brave dog.” Woofus chews on his very special big bone, as the children regard him from a safe distance.

He might be a brave dog, and they’re happy to have him in the family, but they still wouldn’t dream of petting him.

And now you have had the same reaction that literally dozens of children had in the late 1940s, when given this book by their well-meaning aunts: unblinking silence.

Sure enough, the next night at bedtime, the little kids were clamoring for a bedtime book. “Mommy, could you read me Pat the Bunny again?”

One thought on “The (Not So) Exciting Conclusion of Woofus”