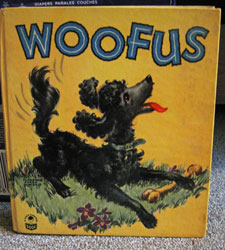 As part of our bedtime ritual, I read about four short children’s books to my son, whose online nickname is Kung Fu Panda. Last week, I wanted some variety, so I grabbed a book off the “special” shelf, which is off-limits for KFP, reserved for books that we’d like to keep in good condition (signed by the author, delicate, antique, and the like). The book I selected was “Woofus” by Florence Sarah Winship, illustrated by Jane Curry (Whitman Publishing, Racine, Wisconsin, 1944). My dad owned it as a child, and he gave it to us after KFP was born, along with a couple of other vintage books too delicate to be manhandled by a toddler. Inside the front cover, there’s a hand-written dedication to my father from his aunt, who gave it to him for “Xmas 1948.”

What a lovely piece of family history, I thought, as I turned the page and began reading the story. Keep in mind, this book was published just four years after the classic children’s book, “Pat the Bunny” by Dorothy Kunhardt. I looked forward to a delightful combination of 1940s artwork and a quaint story. Well, I was half right. 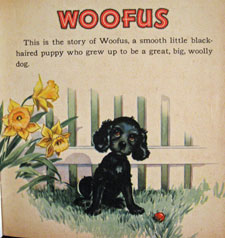 The title page announces: “This is the story of Woofus, a smooth little black-haired puppy who grew up to be a great, big, woolly dog.” A rather misshapen puppy with large eyes and a round, shiny nose sits in front of (naturally) a white picket fence. He has a red ball that is so small  it looks about the size of a large strawberry. His ears protrude oddly from his head, as if they’re just tacked on. But perhaps that’s what puppies looked like in the 1940s. 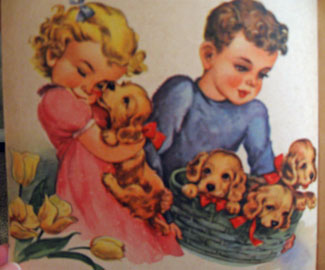 On the next page, we’re introduced to the litter mates of Woofus, who are all “golden-brown puppies,” They are also all wearing red bows around their necks, while Woofus conspicuously lacked one on the previous page. Apparently, only blonde puppies get bows. More strikingly, it doesn’t seem the least bit possible that they come from the same litter as the puppy on the previous page. Perhaps someone ought to tell Woofus he’s adopted?

The rather lengthy text on the facing page reveals that, when visitors come to see the litter, they say, “Aren’t those cute little puppies! But oh, look at that funny little black one.” Woofus is a little sensitive about this, because he realizes they are laughing at him because he is black and not brown like the others. Hrmm. OK. Well, I’m sure I’m just reading too much into that, right? Of course, all the golden-brown puppies get adopted, while the kids are stuck with that “funny black” puppy, whom they name Woofus because he says “Woof-woof” while the other puppies say “Bow-wow.” I guess black puppies speak in a different dialect… 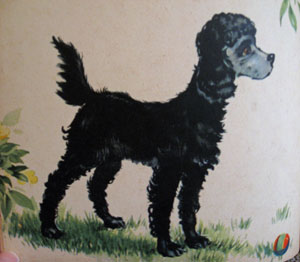 Woofus is smart enough to realize that nobody wants him, but he tells himself that he will be a “great, big, brave dog” and that his family will be glad they kept him. They still, however, give him balls to play with that are small enough to be choking hazards. Purely accidental, I’m sure.

As Woofus gets bigger, the book relates, his black coat gets “longer and woollier.” Again, I’m sure we’re not supposed to read anything into the fact that the texture of his fur is so different from that of the little blonde puppies. Of course, his family finds his fur to be freaking hilarious: “One day when Bobbie and Jean came down to the kennel with their mother, they laughed and laughed and laughed because Woofus looked as though he had on a woolly bonnet and woolly stockings.”

Again, Woofus realizes they’re laughing at him and tells himself, “People laugh at me now, but some day I will not only be a big brave dog, but I will be a big handsome woolly dog.” You go, Woofus. Say it loud: I’m black and I’m proud. 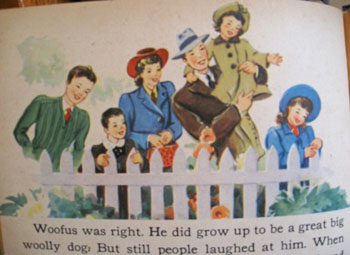 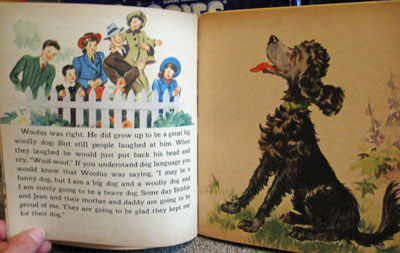 The book continues: “Woofus was right. He did grow up to be a great big wooly dog. But still people laughed at him.” As is evident from the picture above, they would put on their Sunday best to peer over the fence at him and laugh and laugh with their oddly identical mouths.

Still, our optimistic hero dreams of the day that he will prove himself to be a brave dog and “Bobbie and Jean and their mother and daddy [will] be proud of me.” Makes you want to pat him softly on the head, doesn’t it?

When the story continues, Woofus gets a chance to prove himself by rescuing a teeny-tiny cat from a tree… who happens to be black. Go ahead. Tell yourself this book couldn’t possibly get any more offensive. You will be wrong.

Will Woofus prove himself brave enough to make up for being black?

Will the family be more accepting of a wee black kitten?

Could they possibly pick a worse name for an animal than Woofus?