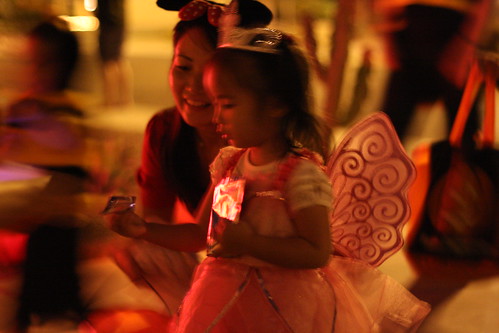 “Halloween on Harrison Court” by Kevin Dooley from Flickr

Halloween poses some unique challenges for kids with diabetes. Halloween is about many things: costumes, ghost stories, jack-o-lanterns, and late-night fun with friends. It’s also about candy. Lots of candy. Kids, costumes, and candy. If your child is diabetic, that last item will pose a problem.

If your child has diabetes, you’re likely familiar with the hazards of candy. Pure sugar with nothing else to balance it out. Halloween is probably the most intense celebration of candy in the United States these days. Halloween is also a wonderful night for children, giving them a chance to get outside in the night with friends, dress up in wild costumes, and generally celebrate their imagination.

Communicate Ahead of Time

Speak with your child about his condition ahead of time. Speak clearly about proper diabetes care, stressing the concrete dangers of hyperglycemia. He’ll understand your concern, learn self-dependence, and be thrilled to earn your respect by getting the opportunity to take care of himself. Plan ahead. If you’re comfortable with this, tell him he can bring home anything he wants, as long as he waits until coming home to eat. This will ensure you can observe what exactly he eats on Halloween. Also, this plan will allow your child to have a normal, fun Halloween with the neighborhood kids.

Trick or Treat With Your Kid

If you would rather have a hands-on Halloween experience with your child, go along for the ride! This will allow you to observe your child as she has safe, spooky fun. You can build memories, speak about pedestrian safety, and get an interesting perspective on her imagination. You’ll have fun and get to make sure you see what your kid eats. Remember that diabetic care be difficult for a child, both intellectually—it can be difficult to understand what the proper care actually consists of—and as a matter of willpower. Throwing off her blood sugar may make it more difficult to treat her; and improper use of diabetes meds is a common reason for emergency room visits. Your presence as a parent can help her with understanding as well as keeping her on task.

After you’ve gathered the sweet, precious hoard, gather it up and organize portions. As a parent of a child with diabetes, you’re aware of your kid’s blood sugar and eating patterns. Diabetic children can, of course, eat sweets. But diabetic children, even more than other children, need to be careful. Rationing candy can help your child keep track of her sweets. This will also allow her to eventually eat all of that good candy WITHOUT overindulging. Wrapped candy can last a long time, after all. You could even make your Halloween harvest the entire year’s candy ration, doling it out in small doses when the occasion calls for it.

Amy Patterson is an avid reader on trending topics and a writer in her spare time. On the beautiful coast of North Carolina you will usually find her catching up on the latest news with locals or on the beach. She loves to write pieces on health, fitness, and wellness, but often writes about families and safety.

My son, a kindergartner, has to do homework four times a week. While that might sound excessive, the assignments currently consist only of a page or two of simple number recognition exercises in his math booklet. In addition, the teacher sent home about 20 optional activities designed to reinforce letter sounds, sight words and vocabulary.

After we’d done a series of silly sentences, KFP suggested we sing some silly songs. No rules; just improv, the sort of thing we’d done before while taking a long drive. He started us off with a song called “The Elephant Drives a Truck.” We took turns singing lines, with no real rhyme scheme, telling a rambling story of an elephant who crashes into everything and then gets in trouble.

“Sure, I’ll start this one,” I said and began a song about leaves falling off a tree.

KFP interrupted me. “That’s not funny,” he said.

“It’s only the first line,” I told him. “You set up the joke, and then you have a punch line.”

“Ohhhh!” he said, and I could see enlightenment sweep across his face.

I realized at that moment that most of his humor is conceptual, about the ridiculousness of the premise. I explained that humor can also come from playing off expectations. The unexpected can be funny, I told him, and hammered the idea in later when one of his shoes fell off while he was walking.

We started again, creating a silly country-western song inspired by the upcoming Farmer Fun Fall day at KFP’s school. We even rhymed occasionally: “Come down to our jamboree, where we’ve got cows and pigs for free!” At the end, we both called out “Yee-haw!” in unison.

If we’d have been on the stage, that would have been a great blackout moment.

But since this was real life, and he is five, he kept trying to recreate the magic of that silly elephant truck song. In the coming days, we sang about a rabbit driving a tractor, about a mouse driving a bus, all essentially the same rambling saga of animal-wrought destruction and chaos.

Then, as we were sitting on the grass, waiting to pick his friend up from his bus stop, KFP asked if we could write another silly song.

“OK, but let’s make this one different,” I requested.

“I’ll start,” he offered, and began, “The elephant took off in his rocket…”

I chimed in, “And blasted into space.”

KFP continued, “And he crashed into the Milky Way…”

He had to stop singing then, because I laughed uncontrollably for minutes. My pupil.

The other day, when he got home from kindergarten, my boy, Kung Fu Panda, wanted to play the new LeapPad game we’d just downloaded as a reward for earning enough stickers on his sticker chart.

I was out of the room, doing dishes or putting things away — it’s always at least 30 minutes before I get to sit down — and returned to find KFP looking upset. “It won’t let me do anything,” he said.

I took the device from him to have a look. Sure enough, the LeapPad was doing something I’d never seen before: instead of starting up, the display showed a LeapPad with an alert symbol on it and a white cord connecting the LeapPad to a computer.

“Guess we have to connect it to the computer,” I mused aloud and pulled the white cord out of the cabinet.

Once connected, the screen directed me to download the LeapPad Connect software, which I soon surmised was a diagnostic tool for finding and fixing problems. After a couple false starts — including moving from my dinky notebook to my husband’s laptop in order to see the full screen of the application — the program began a lengthy process which seemed to involve a complete reinstall of his LeapPad’s software. Uh-oh.

Gently, I explained to KFP that, when his LeapPad was fixed, it would have the programs but not the settings. I didn’t go into detail, for fear he’d be upset, but I was fairly sure that all of his photos and drawings, his stickers and badges earned from playing his games, would have disappeared into the ether.

When the process ended, I handed the freshly-repaired LeapPad to my son and graced myself for the worst. Would he shriek or wail? Would he cry inconsolable tears as I vainly tried to explain I could do nothing to restore those files? (Perhaps a computer genius could recover them, but I don’t work for “CSI.”)

And then the most amazing thing happened. Nothing.

“I guess I need to take a new picture for my profile,” he said. I tried to walk him through it, but he didn’t need much help. He chose a new background — a tropical fish tank — and opened the virtual pet game to recreate his little brown monkey, Bimbie Baby, completely redecorating his apartment. “Look, he has a flatscreen TV now!” he told me.

Later, opening up the logic game where you build a town by solving space puzzles, KFP was delighted to see the town completely empty. “I’ve been wanting to rebuild it,” he told me.

If only he was always this flexible. If only I was.

An eon ago, in my pre-child days, a yoga instructor tried to explain the principle of attachment. At the time, I’m not sure I understood him as well as I believe I do now. No zen koan can teach the principle of attachment quite as well as motherhood. For I challenge you to find another experience where you are so deeply attached to someone, and yet where you are constantly reminded of the need to let them go.

From the instant he began to smile at ceiling lights — we said he was laughing at his guardian angel making silly faces — I knew the full realization of his life and being would one day lead away from me. From his first steps, to putting him on the bus to school, I couldn’t deny that this kid was going places.

As a friend once told me, everything is a stage. Crying at the top of his lungs every time you go to the grocery store? A stage. Peeing his pants because he can’t stand to tear himself away from his toys? A stage. But so, too, are the good stages, such as when he sits close to you, cuddling your arm, just because he feels like it.

It’s all a stage, and everything is always new again. I hope I can learn from KFP how to look forward to all the new challenges ahead, to build things anew.