This week, while brainstorming a possible name for tired parents, I did an Internet search for the term “mombie.” Imagine my surprise when I discovered that the term already existed and meant something quite a bit different from what I thought was my genius idea. A mombie, according to the collective wisdom of the Internet, is a mother who was once a feminist and is now a pale shadow of her former self, caring only about cooking, cleaning, and caring for baby.

My discovery prompted my entry this past week for the online writing contest, LJ Idol, a humor piece I called Attack of the Mombies, which placed in the Top 5 in votes.

In the piece, I tried to channel Erma Bombeck, who was famously self-deprecating about her own domestic skills. As I was writing it, though, I was highly aware of the fact that few of us live at one extreme or the other. The truth is, I often enjoy cooking, while I’m in the midst of it. But while I like eating the results, it’s simply not something I spend much of my waking time pondering. It’s not that I fault mothers who do enjoy cooking; I simply find my thoughts (and most of my conscious energy) focused elsewhere.

That’s the nagging aspect of this topic that my piece — built around a simple humor device — couldn’t begin to approach. What, exactly, is feminism? And are feminism and housework mutually exclusive? My immediate response is to say no, they’re not; in fact, it’s a preposterous idea. Feminism is about expanding choices, and some women choose to spend the bulk of their time cooking, cleaning, and taking care of other household tasks.

I’d like to hear further thoughts about the feminists v. mombies debate. Where do you categorize yourself? And is it a destructive argument to be having, to begin with?

Looking forward to Belated Mommy? Name your own price for my new special-edition ebook, Now with Kung-Fu Action Grip, featuring writings about pregnancy and my toddler’s first years.

My little guy loves books, and it’s not unusual for him to request that I read him one immediately upon waking. This morning, however, while I was getting ready he quietly sat down and “read” a book to himself.

Now, in the past, I often heard him repeating fragments of the actual text for his books, which he’s memorized from hearing them so often. Other times, he makes a running commentary, identifying objects, colors and shapes in the pictures.

Today, it was a little different. “Reading” the book “Wiggle” by Doreen Cronin and Scott Menchin, he told his own story from the point-of-the-view of the main character, a tan dog. “I can be a circle like you,” the dog said to a ball as he rolled up like one. “I’m jumping on the bed!” the dog exclaimed on a page that showed him doing that.

Then came my favorite moment. As the dog approached a crescent moon, whose facial expression was somewhat startled, the dog said, “Hi! I’m going to eat you! You’re yummy.”

Maybe someone has told him that the moon is made of green cheese. 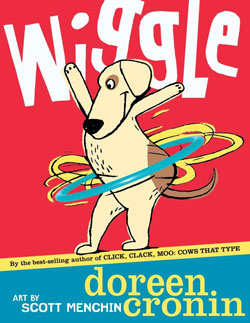 A few weeks ago I shared a link with some friends, a blog about gender assumptions, particularly when it came to boys. This stirred up a lot of discussion on my Facebook page, and it inspired me to write an open letter to children about how to respond to naysayers when it comes to challenging gender roles. The letter has been getting an extraordinarily positive response.

Before I wrote that piece, though, I approached the subject from a different way, a more personal one. I’d like to share that first draft here now.

Several boys had already arrived wearing costumes when we entered the Superhero Party held at the local YMCA. At first, I felt a little self-conscious about the fact that our Kung Fu Panda wasn’t wearing a costume, but he wasn’t the only one. As more and more boys arrived, a few of them were wearing their favorite T-shirts, whether they sported robots or dinosaurs or cars or something else entirely. But while there were both costumed and non-costumed little superheroes participating in this party, there were no girls. Nor do I imagine any boys showed up for the Princess Party held later.

As a little girl, I would’ve rather been a superhero then a princess. My mom, who kept my hair short because she said it was easier to take care of; my mom, who dressed me in pants and let me get messy and tear holes in the knees, would’ve taken me to the Superhero Party, just as my sister, who is raising a fiercely independent one-year-old girl, would do the same. It’s an easy choice, really, since parents know it’s important to raise daughters who believe in themselves, who are independent and strong. It’s a much easier decision that it might be for many parents whose sons want to join the Princess Party.

I think it’s about time that we think about how to promote equal rights for boys.

I’ve given the subject a lot of thought ever since coming across an article about a mom wrestling with gender stereotypes as they affected her son. When I shared that article on Facebook, I got a range of responses: from both male and female friends who were thrilled to see that I was coming down on the side of accepting boys, regardless of how traditionally masculine they are, and responses from other people who seemed to lay the problem at the feet of television, saying that the mother in the blog post in question should just “stop watching television and parent her child.”

If only it were so easy. If only we could protect our children from all of society’s influences simply by hitting the off button. Sadly, society’s ideas about boys and girls are not confined to television.

Since the doctors surprised me with prenatal tests confirming I would be having a boy instead of the dark-haired girl I’d imagined, I have spent countless hours pondering the right way to raise a caring, well-rounded boy. So far, I think we’re doing a good job: while KFP does possess those quintessential “boy” traits of being active and adventurous, he is also thoughtful, reflective and sensitive, traits not typically considered “boyish.”

For example, right now my son and I are in the car with our mewing cat, Luke, taking him to the vet to be weighed, since he was underweight at his annual exam a month and a half ago. As we were putting our coats on, the cat was in his carrier, mewing loudly. KFP asked me, “He’s crying?”

“Is the sad?” he asked, a note of sympathy in his small voice.

Reaching out a chubby hand to pat the top of the carrier, he said, “Poor kitty.”

What makes me sad is the almost certain knowledge that someday, someone over whom I have no control will tell him that it’s not okay for boys to express their feelings, and that empathy is overrated.

Growing up in 2013 may be a little different than it was for me, growing up in the 1970s. Girls have more options than ever when it comes to sports, after-school activities and more. But there’s still a long ways to go. While on paper it’s readily understood that some girls want to be princesses and some girls want to slay the dragon, if you’ve ever gone shopping for children’s clothing, you know how difficult it is to find gender-neutral clothes.

While it’s acceptable and even encouraged for girls to emulate such supposedly “masculine” traits as resilience, persistence, strength, adventurousness, and bravery, boys are not encouraged to display such “feminine” traits as sensitivity, creativity, artistic sensibility, quietness, and nurturing. And in a world where it’s increasingly more likely that a father will play an active role in raising his child, boys are still discouraged from play-acting those roles with dolls.

This is why I found it so encouraging when an episode of “Sesame Street” showed one of the monsters, Telly, playing with a doll. And while initially he tried to hide his toy from another male character, he got some good advice from Gordon who, wearing a bright-pink button-down shirt, told him that it was okay for boys to play with dolls and practice being a daddy, just as it was okay for men to wear a pink shirt. So much for television being the propagator of gender stereotypes.

I’ve talked on the playground with a several parents of boys who have similar concerns. We’ve swapped notes about the difficulty, for example, of finding boys’ clothes that contain anything other than the typical primary colors. At least three of us have boys who love purple, but unless you’re a fan of the Baltimore Ravens, it’s nigh impossible to find that color on clothes that aren’t frilly and obviously made for girls. Fortunately, KFP’s other favorite color, green, is much easier to find.

Already I’ve dealt with numerous gender-based assumptions that made me contemplate what lies ahead for my boy. Our son has naturally-curly honey-blonde hair, and from the beginning, we have loved his luxurious locks. We get his hair cut about every six weeks, and at its longest, it’s barely even covered his ears. Yet, I have heard multiple comments from people in his 2-1/2 short years, either asking if he’s a girl, or even going so far as to strongly suggest that I get his hair cut shorter, in a “boy’s” cut.

We, as parents, have the first opportunity to change the thinking. Regardless of what other messages they may hear, from friends, strangers or the media, we can let them know that we support them. Whether they are football players or dancers, adventurers or artists, whether they love blue or pink, we can let them know that we accept them for whoever they are, and most importantly, that we love them.

Only five days left to help us get our little guy to a wedding where he’s supposed to be the ringbearer. Please check out our Indiegogo campaign: Get the Ringbearer to Illinois