Last week, I introduced you to a (perhaps) accidentally racist children’s book, Woofus, which I described as “justifiably forgotten.” In a play-by-play of the first section of the book, I told you about poor Woofus, who is the only black puppy in his litter and, as a result, is the recipient of ridicule from his unenlightened human family. I promised you that the next section of the book would be even worse, and just in case you didn’t believe me, here it is. 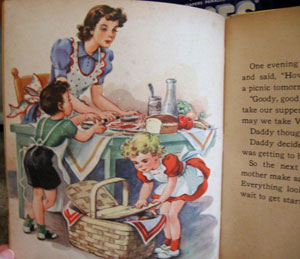 Next, our perfect 1940s family prepares for a picnic trip in the woods. This, of course, requires peanut butter and lettuce sandwiches (look carefully at both the sandwiches and the ingredients spread on the table), as well as tomatoes and bananas, all packed lovingly into the basket by the 6-year-old girl, who dumps everything in at one end without looking.

The children ask their Daddy if they can bring Woofus with them, and Daddy thinks it over and agrees, reasoning that “he was getting to be too big to keep fenced in all the time.” This implies poor Woofus never gets walks, likely because the family is ashamed to be seen with him. Secretly, the father probably hopes that “funny-looking” Woofus will get lost in the woods. 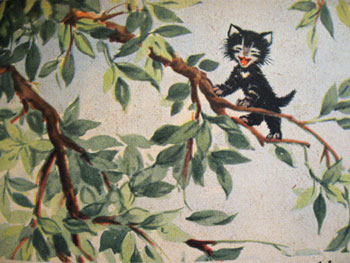 When they arrive in the woods, Woofus is so relieved to have freedom of movement that he runs around, barking. The family’s response, of course, is to laugh because he’s acting “like such a silly dog.” Grateful not to be penned in a back yard? How foolish!

Woofus takes root at the foot of a tree (see what I did there?) and barks so persistently that Bobbie runs over to see what’s going on. At first, he scolds Woofus for the disturbance but then hears a “weak little ‘Me-ow’ from the treetop.” He sees a little black kitten. Aww! Daddy agrees to rescue the wee thing. It may be black, but it is awfully tiny and cute. 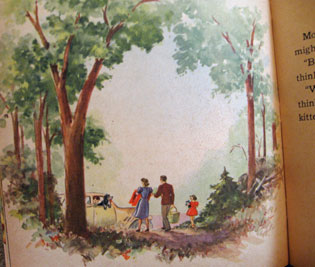 Mother and Daddy agree to take the lost little kitten home, although Bobbie wonders aloud if Woofus will like the kitten. Daddy replies that Woofus is smart and that, because he discovered the kitten, they would probably become very good friends. (Though secretly, I believe he’s masking his disappointment that Woofus beat him back to the car so that he couldn’t pretend the dog got accidentally left behind.)

Meanwhile, Jean’s love for the new kitten (which seemingly grows in her arms to nearly full-grown size) has turned her hair from bright blonde to light brunette. 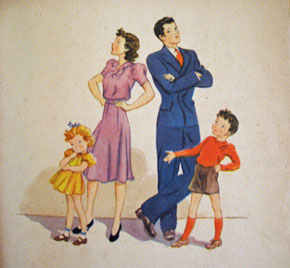 Upon returning from the woods, the family engages in their favorite activity: pretending to be magazine models. No, not really. They just happen to adopt very dramatic poses while pondering what to name their new kitten. They are so busy thinking they don’t notice that Jean has changed her hair color again, this time going for strawberry blonde.

Daddy suggests… Goofus. Because it rhymes with Woofus, of course. But the rest of the family rejects this name, probably because it’s not offensive enough. How do I know this? Because they readily accept Bobbie’s proposal, and I quote, “Let’s call him Tar Baby because he is as black as tar.”

The rest of the family agree this is a very good name for the little black kitten that Woofus found.

So… still on the fence about whether this book is just a teensie-eensie bit racist? I thought not. 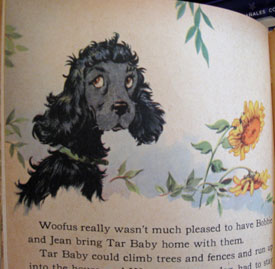 Far from being pleased, Woofus is actually jealous of Tar Baby, who is allowed to climb trees and fences and run into the house, while Woofus has to stay in “his own private dog yard.” This implies that Woofus doesn’t even get the run of the entire backyard but only a “special” fenced-off portion of it. Poor Woofus. If he wanted to be treated better, he should have tried harder to be born blonde like the other puppies in his litter. Then he could have been given away to a family that treats dogs better. 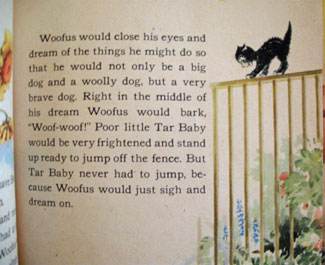 While Tar Baby is busy taunting him, Woofus once more internalizes his problems, dreaming of things he might do so that he would not only be “a big dog and a woolly dog, but a very brave dog.” Maybe that would finally make his family love him.

I should note that, while I was reading this story aloud to KFP, I opted to insert a sentence, saying, “The family decided to change the kitten’s name to Chocolate, because Mommy loved chocolate.” I made this choice because I was worried that KFP would repeat the kitten’s name somewhere, like at preschool or the library, not realizing it was considered a racist slur. This turned out to be a good choice, since Tar Baby would be mentioned by name 13 more times in the story. 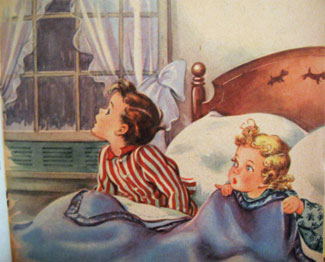 At this stage in the story, Daddy actually stands up for Woofus, not only reiterating that he’s smart but also asserting that since Woofus is such a good dog, he should be let out of his yard more often. Since there’s no indication that means giving Woofus walks on a leash, maybe he’s secretly hoping the dog will use the opportunity to find a more accepting home.

Then, a nighttime storm, complete with thunder and lightning, makes Bobbie and Jean sit up in their shared bed. The storm is so loud, it has turned Jean’s hair blonde again. Although they can hear the animals crying in distress outside the window, they don’t permit them to come inside. “I wonder if they are getting wet,” Bobbie ponders aloud. Hmm. I wonder.

Silly Woofus should have realized that the only dogs allowed inside this home are the decorative dogs that adorn headboards. 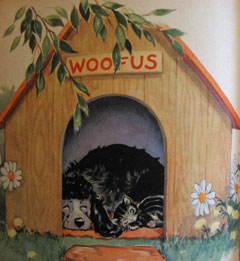 In the morning, the family discovers the animals huddled for safety together in the dog house. Woofus woofs and woofs, which Bobbie and Jean interpreted as him “telling them that he and Tar Baby were friends.”

Really, he is probably telling them off for leaving him outside during a thunderstorm. 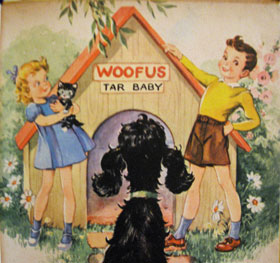 Later that day, Daddy has “the painter” add Tar Baby’s name on the dog house, along with “Woofus.” Yes, the family has a painter on retainer but can only afford one bed for the children.

Bobbie and Jean are very pleased with the new sign, as are Tar Baby and Woofus (who after all, can’t read). They are so proud of the sign that they can’t imagine that anybody could ever object to it, and they can’t imagine why, 70 years later, their book will be out of print while that silly “Pat the Bunny” book will still be selling millions.

You would think this would be the end of the story, but it’s only the end of the second act. Woofus still needs to achieve his main goal: true acceptance by the family. He tells himself once more, “I am a big dog. I am a woolly dog, and I am a smart dog. But I must be good and brave so that Bobbie and Jean will always be glad they kept me.”

Will Woofus prove he’s worth keeping?

Will the illustrator ever draw any actual action?